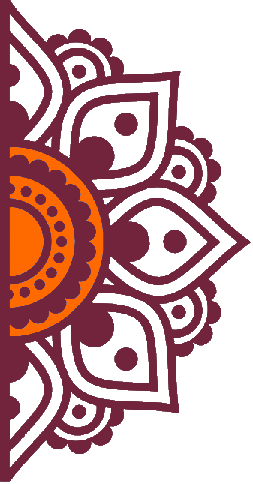 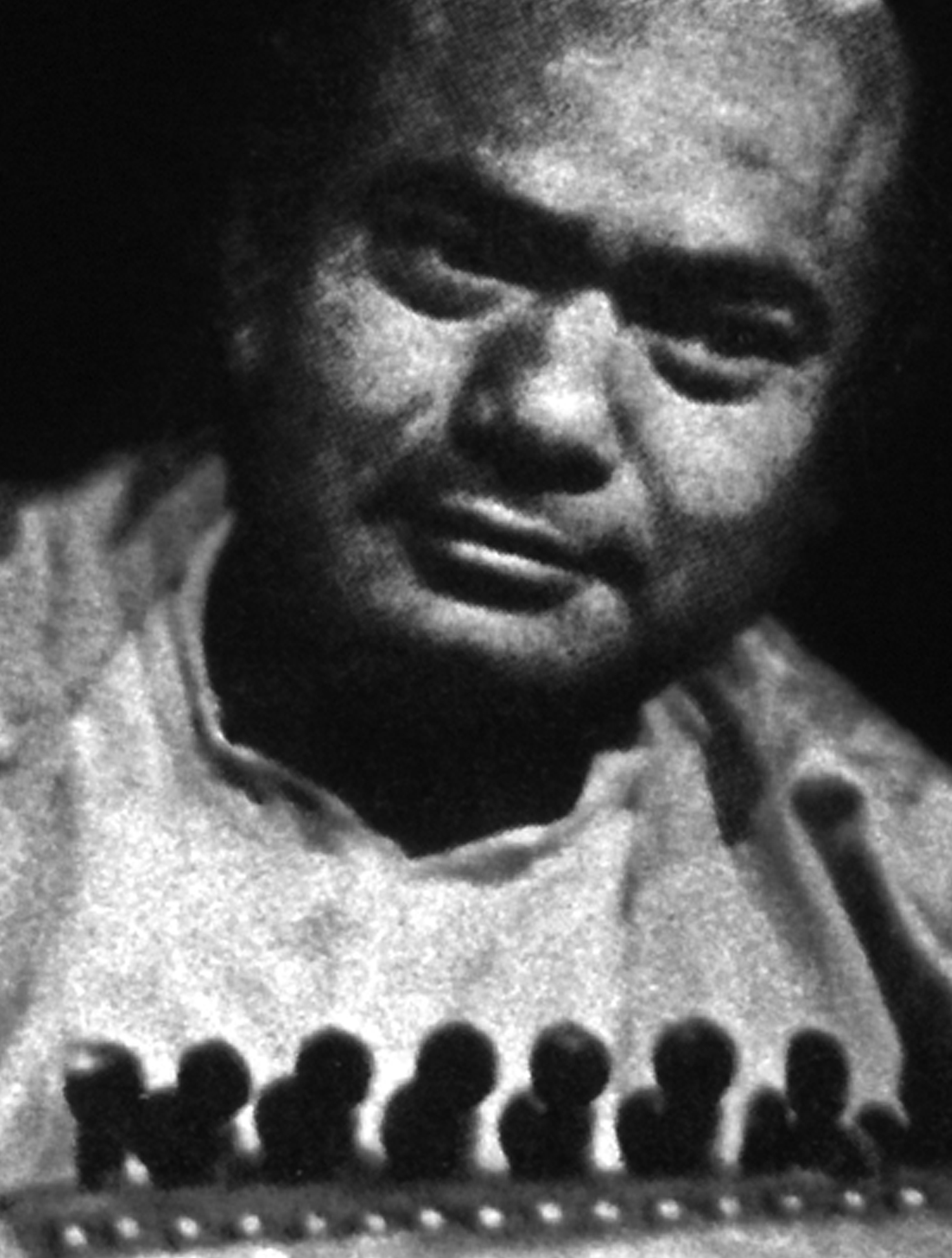 Music is an integral part of Indian life–in the temples, in the fields, in homes and on the streets. In this land where art is not separate from the rest of life, music can be for some the path to salvation.

One of the Hindu concepts of God is as Nada Brahma, the embodiment of musical sound:

We adore that Supreme Being
of the form of sound,
Nada Brahma,
which is the one bliss
without a second
and the light of consciousness
in all beings
that has manifested itself
in the form of the universe.
Sangitaratnakara of Sarngadeva

Even the deities have particular instruments with which they are identified–Shiva with the damaru (percussion), Krishna with the flute (wind) and Saraswati with the vina (strings).

For those who choose the disciplines of music as their life’s work, the way is long and difficult. Such knowledge is not purchased, it must be earned. During the years of musical training the student subjects himself totally to the authority of his guru, living in his home, serving and caring for him. When he is sufficiently advanced, the student may earn the privilege of accompanying his guru on the tamboura. After eight or ten years of musical training the student will have learned much beyond technique. He will know the subtleties, the nuances, and above all the Bhava which distinguishes his particular gharana.

Of the men and women who have undergone this rigorous discipline, a few artists have been celebrated. They are from musical families who have for centuries faithfully bequeathed their musical traditions. Most of the musicians have been associated with All India Radio, which is considered to be a symbol of achievement. They have all concertized widely and have received many honors in their own land and abroad. All the artists are considered by their countrymen to be outstanding in their fields and most are pioneers in terms of extending to the fullest the potential of their instruments.

Legendary virtuoso sitarist, composer, writer, and teacher—Ravi Shankar was India’s most esteemed musical ambassador and a singular phenomenon whose artistry crossed all cultural and musical boundaries, renowned throughout the world for his pioneering work in bringing Indian music to the West.

The youngest son of a Bengali family, Shankar was born in 1920 in Varansi (Benares) India and spent his youth touring India and Europe with the dance group of his brother Uday Shankar. After years of splitting his time between dance and music he dedicated himself solely to the sitar in 1938, returning to India and studying for seven years under his guru, “Baba” Allaudin Khan. After finishing his studies in 1944, Shankar worked as a composer in Bombay and Delhi, creating the music for Satyajit Ray’s Apu Trilogy films, working as the director of All-India Radio, establishing the National Chamber Orchestra (Vadya Vrinda), and innovated Indian musical traditions by incorporating folk melodies into his concert performances. In 1956, as word of his virtuosity spread throughout India, then Europe, Asia and the United States, Shankar began touring and embarked on one of the most extraordinary careers in the history of contemporary music.

The late 1950s and 1960s proved extraordinarily productive for Shankar, as he toured the West, produced a plethora of albums, composed for both Indian and Western orchestras, established several schools of music, served as guest lecturer at both UCLA and CCNY, performed at both Monterey Pop and Woodstock music festivals, and won a Grammy with Yehudi Menuhin for the groundbreaking West Meets East album.

By the 1970s, Shankar’s activities engaged the world in Indian musical cultural traditions and introduced Western techniques and instruments to Classical Indian forms on such a scale, they earned him the title ‘Ambassador of World Music.’ In 1970, Shankar ushered in a major period of East-West collaboration with his first of three concertos for Sitar and Orchestra, commissioned by the London Symphony Orchestra and premiered under Andre Previn. Furthering his dedication to ‘Peace Through Music’, Shankar’s collaborations (and friendships) with virtuoso violinist Yehudi Menuhin, the Beatles’ guitarist George Harrison, and minimalist composer Philip Glass (among others), established him as an advocate of music as a means of social change, most known through the benefit concerts for Bangladesh organized in 1971 by he and George Harrison.

The 1980s and 1990s were no less a time of creativity. Both his second Concerto for Sitar and Orchestra (with the New York Philharmonic, conducted by Zubin Mehta) and his dance drama, Ghanashyam, premiered in 1980. He wrote the Academy Award-nominated score to Sir Richard Attenborough’s 1982 film Gandhi. In 1986, he served a member of the Rajya Sabha, India’s Upper House of Parliament. Just prior to Berlin Wall coming down, Shankar performed in 1988 with an international ensemble inside the Kremlin. In 1990 he released a highly popular collaboration album with Philip Glass, Passages. Beyond his public appearances and composing, he wrote his 352-page autobiography, Raga Mala, published in 1997. He also began to train his daughter, Anoushka Shankar, on the Sitar in the late 1980s, which culminated in her public debut in performance with her father at the age of thirteen for his 75th birthday in 1985. Throughout they 1990s they toured together extensively.

In the 2000s, Shankar remained active in his teaching of the Indian Classical Gurukal System by founding the Ravi Shankar Centre (aka the Research Institute for Music and the Performing Arts) in Delhi in 2000 with the support of the Ford Foundation and its sister organization, the Ravi Shankar Foundation, in the United States. Shankar also premiered a number of Western classical-influenced works including: contributing music for Orion that opened the Cultural Olympiad in Greece (2004); his third Sitar Concerto, commissioned by the Orpheus Chamber Orchestra with Anoushka on Sitar (2009); the Sitar and Violin piece Variant Moods for Joshua Bell and Anoushka (2009); Symphony for the London Philharmonic Orchestra (2010).

In 2010, Shankar, indefatigable even at 90-years old, founded his own independent label, East Meets West Music, as a way to bring to audiences the rare and unreleased recordings held in his archive and hand picked by Shankar himself between 2009 and 2012. East Meets West Music also released his final recordings, The Living Room Sessions, the first installment of which won the Grammy award for Best World Music Album.

George Harrison has (aptly) called Shankar the “Godfather of World Music.” The love and respect he commands both in India and in the West is unique in the annals of the history of music. However, there may be no greater tribute paid to this remarkable musician than the words of his colleague and friend, Yehudi Menuhin:

“Ravi Shankar has brought me a precious gift and through him I have added a new dimension to my experience of music. To me, his genius and his humanity can only be compared to that of Mozart’s.”

It was with great sadness, that, in late 2012, we marked the passing of Pandit Ravi Shankar: sitar virtuoso, cultural ambassador, teacher, friend, father and inspiration to audiences all over the world. But it is with great joy that we celebrate his life of 92 years, its uncompromising dedication to musical collaboration beyond national boundaries, its virtuosity in every creative endeavor, and the Maestro’s fundamental love of India classical music. The accomplishments of Ravi Shankar and his vision of Peace Through Music live on as long as there is music to be created and audiences to listen.

Awards: Ravi Shankar was a five time Grammy Award Winner: Best Chamber Music Performance for West Meets East (with Yehudi Menuhin) in 1967; Album of the Year for The Concert for Bangladesh (with George Harrison) in 1973; Best World Music Album for Full Circle: Carnegie Hall 2000 in 2002; Best World Music Album for The Living Room Sessions Pt. 1 in 2013; the Lifetime Achievement Award in 2014. He was an honorary member of the American Academy of the Arts and Letters, recipient of seventeen honorary doctorates and was appointed a Regents Professor at the University of California. He was also the recipient of the following international honors: Praemium Imperiale Arts Award (Japan); Fukuoka Asian Culture Prize; Polar Music Prize (Sweden); Bharat Ratna / Jewel of India (India); Commandeur de la Legion d’Honneur (France); Honorary Knight Commander of the Most Excellent Order of the British Empire (UK); Tagore Award (India).

Performs Sarod on In Concert 1972
Link to website: Ali Akbar College of Music

Ali Akbar Khan is a Hindustani classical musician of the Maihar gharana known for his virtuosity in playing the sarod. Trained as a classical musician and instrumentalist by his father, Allauddin Khan, Khan also composed several classical ragas and film scores. He established a music school in Calcutta in 1956, and the Ali Akbar College of Music in 1967, which moved with him to the USA and is now based in San Rafael, California, with a branch in Basel, Switzerland. Khan was instrumental in popularizing Indian classical music in the West, both as a performer and as a teacher. He first came to America in 1955 on the invitation of violinist Yehudi Menuhin and later settled in California. He was a Distinguished Adjunct Professor of Music at the University of California, Santa Cruz. Khan was accorded India's second highest civilian honour, the Padma Vibhushan, in 1989. Nominated five times for the Grammy Award, Khan was a recipient of the MacArthur Fellowship and the National Endowment for the Arts' National Heritage Fellowship.

Performs tabla on In Concert 1972

Along with Ravi Shankar, Alla Rakha is one of the most internationally influential of all Indian musicians. There is scarcely a part of the Western World where musicians have not been affected by his amazing virtuosity. His technique, tone production and uncanny command over the intricacies of tala have revealed new worlds of percussive possibilities to western musicians, from classical to rock. In India he is also famed as a film score composer. He is a disciple of Kader, Bux and an honoured representative of the Punjab Gharana of tabla playing.